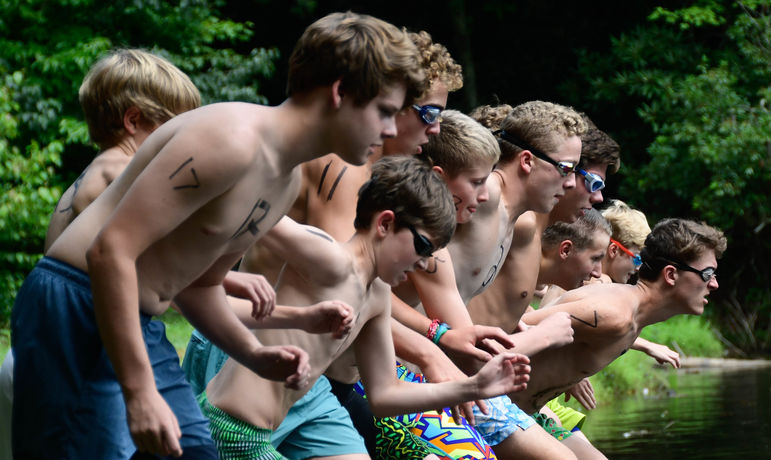 The exciting start to the 2019 Ironman!

“Pow!” The cap gun goes off and dozens of boys jump into the lake from the lower dam. Water splashes and limbs start paddling quickly through the water. Each boy is competing to be the fastest one to swim across to the other side, hoping for a lead in the three-part race of endurance. This afternoon we began our annual Ironman triathlon, a competition that boys can choose to challenge themselves in during Main Camp. This event goes back to 1981 at camp, when it was started under the leadership of Skeet Keyes, Terry Tyree, and Garrett Randolph. This year, we had 36 boys step up to the challenge and compete for the win. 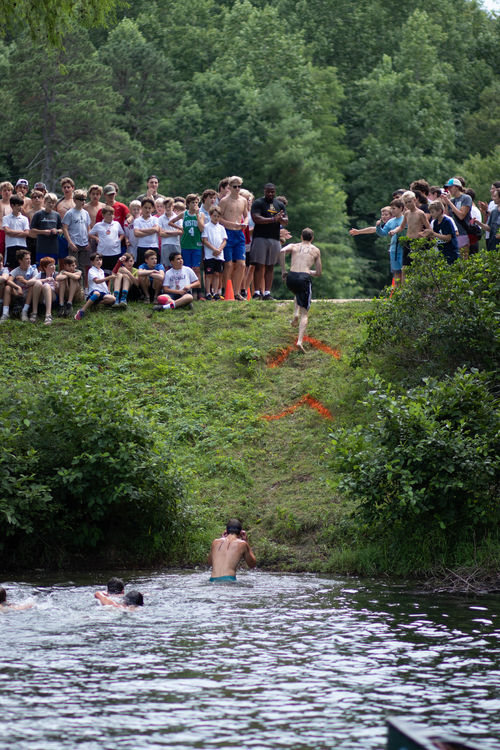 Making it out of Part 1: the swim across both lakes

Just like the real Ironman, there are three parts to the race: swimming, running, and biking sections. Each competitor has to prepare all session long, practicing, training, and preparing. This preparation includes going on a swim check to practice swimming the length of the two lakes, completing a mountain bike prep and “camp ride” to ensure their confidence on a bike, and running the full lap of the trail course to make sure they knew the route. After spending the past three weeks getting ready, today the boys finally raced. 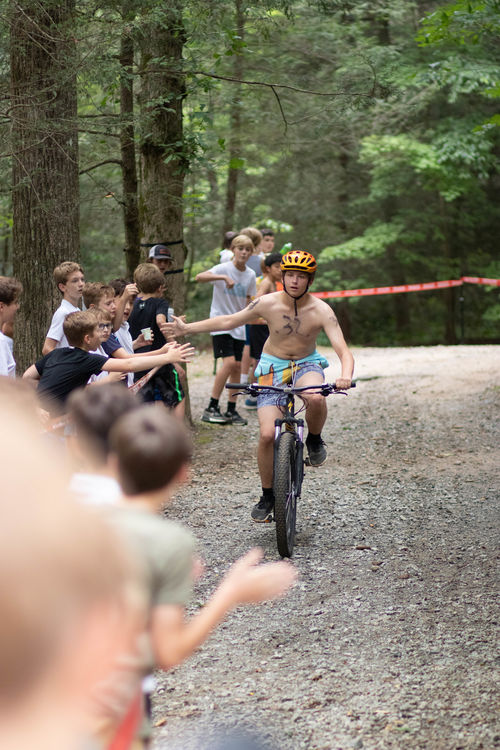 High fives on the 2nd section of the Ironman: mountain biking

To kick off the race, the boys swam across the Lower Lake, ran up the upper dam, and swam around the Upper Lake while lifeguards paddled along next to the swimmers to make sure everything was safe. When they got out at the Roller Coaster, they transitioned to the mountain bike section, quickly putting on shoes and shirts while still dripping wet and breathing hard from the swim. It takes a lot of effort to put a dry sock on a wet foot! Many boys had friends volunteering as “pit crew,” helping them with anything from putting on their shoes, to getting them water, to just cheering them on as they pushed forward to the next section. 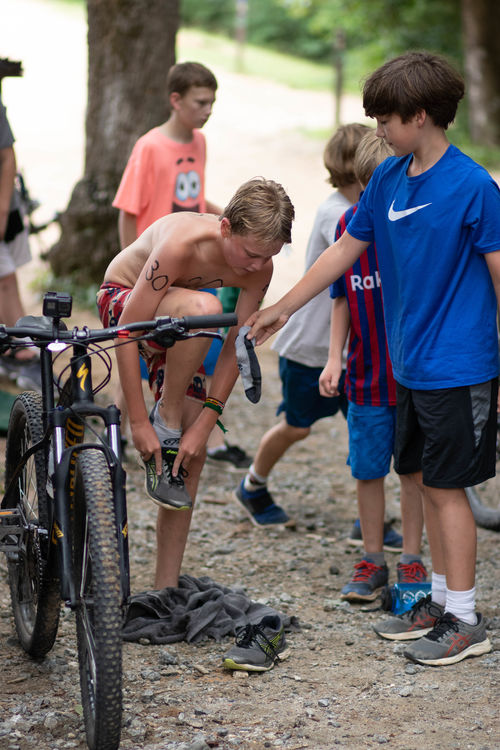 Servant's Heart means helping friends out during the race: supporting them, cheering, and even helping them put on socks

During the mountain bike section, the boys ride two laps of a course around camp, beginning with a challenging switchback climb up from the lake to the back of the Tuscarora cabin ridge. The mountain bike course led riders on familiar trails around camp, but didn’t leave out all the challenging sections. Boys had to climb up a long section from the Lower Lake to the old BMX trail loop above the Iroquois cabins, crossing a technical root section, before finishing the lap on a winding descent back to the Roller Coaster. 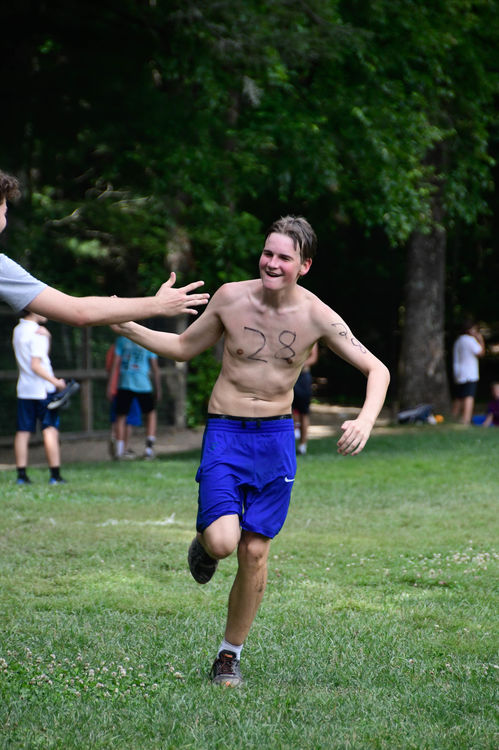 Finishing on Part 3: the trail run to the finish line

After two laps of riding, the racers ditched the bikes and headed out on a different course for two final laps of running. The running route took them on the old “Foo Foo Trail,” heading out toward the old apple orchard and back around to the Dining Hall. Having the course loop around the Dining Hall several times before finishing helps make the race more spectator friendly for those who choose to watch and cheer rather than compete. The race ends on the ball field, with each racer running through the finish line and into the cheering arms of friends, cabin mates, and counselors. 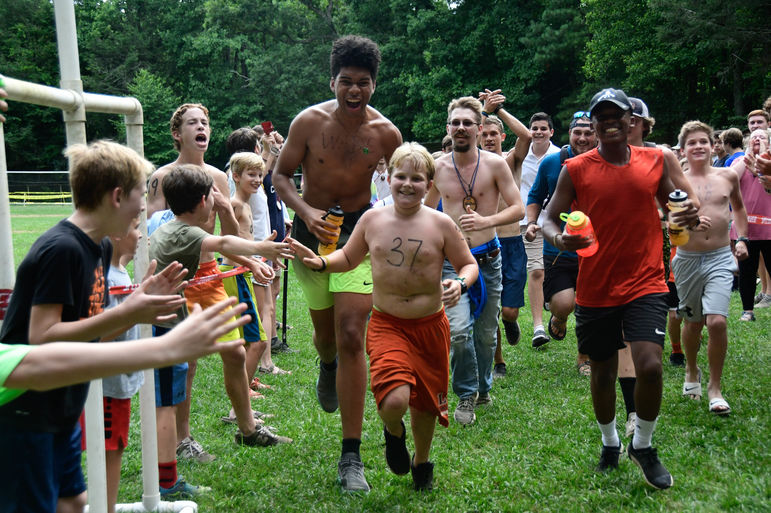 Nothing beats the feeling of getting across the finish line, especially if you're being cheered on by dozens of friends!

As the boys finish, they run right past the landsports hut, which has the names of each Ironman winner from the past 38 years, listed on painted wooden plaques to commemorate the victories. This summer, Cameron S. was our winner! Collier L. finished in a strong second after a tight race. We’re proud of all the young men who competed in this 2019 Ironman, challenging themselves by giving it their all and preparing diligently for the race. 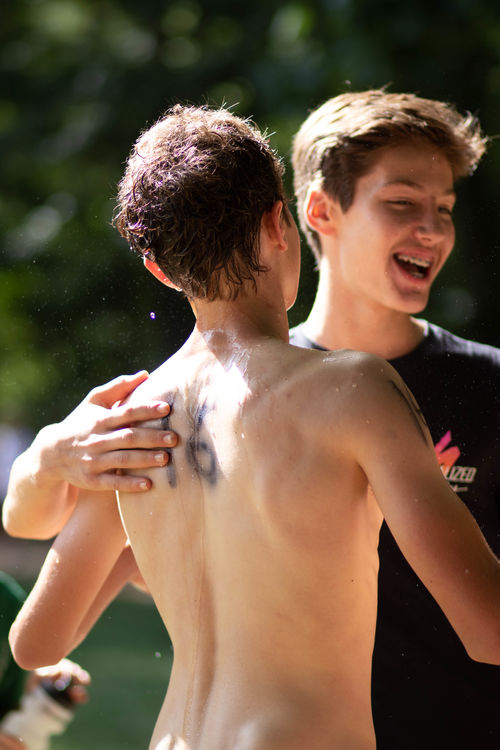 This evening, we gathered in the Campfire area for our last Sunday Campfire before the Candlelight Campfire’s “Ceremony of Light” on closing night. As the whole camp community came together, it was nice sharing the moments of reflection and silence while the James M, a Keeper of The Flame, lit the fire and the flame slowly grew. The silence was only broken by Alex Paris, opening Campfire by announcing, “Behold,” followed by Psalm 133:1. Tonight’s Campfire was about “Integrity and Decision Making”, setting up the final theme for our last week of camp. We had the privilege of tapping four new members of the Honor Council, voted on by their peers for consistently living by the Falling Creek Code and Honor Creed. Alex from Cabin 1, Taishi from Sequoyah, Walter from Rolling Thunder, and Tal from Comanche. Ben Williams also led a “friendship talk,” inviting everyone to come sit down by the fire in a tight group, symbolizing the tightly knit bonds that have already formed over these past three weeks. We’re looking forward to tomorrow, kicking off the final week of Main Camp already, which is sure to be a great one.

More Highlights From This Sunday: 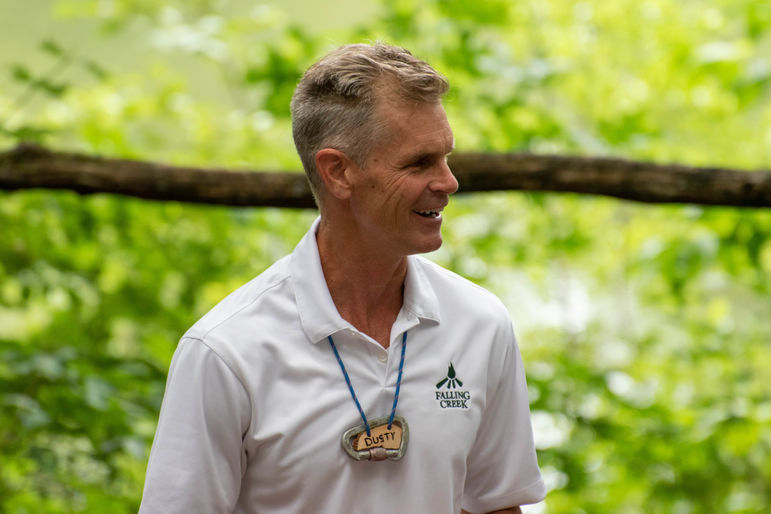 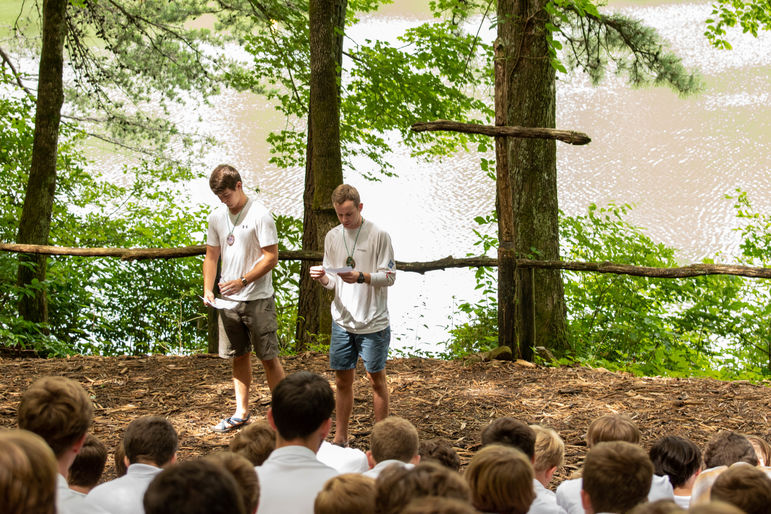