Some of you may only know him as the Indian Lore man. But Jim Kurtts is one of the longest returning staff-members we have here at camp. Working at Falling Creek since the camp opened in 1969, he has seen the camp evolve from a small clearing around a couple lakes to what it is today. The only summers he has missed were due to serving in the military during the Vietnam War.

Sitting down with an interview with him wasn’t difficult. He told me to stop by whenever I had time. So impromptu, I took him up on his offer and dropped into the Indian Lore Lodge during free choice. He sat at a table in the lodge listening to the sound of the nearby Falling Creek rushing by in the background with the newspaper spread out in front of him.

I asked how young he was when he started working on staff. He told me as soon as he graduated High School he got the word. “[My friend knew I] would be moving from Boy Scout camp to a private camp. And [he] said, “Stop by Hendersonville at Camp Greystone to see Jim Miller. He’s been talking about having a boy’s camp.”

Jim recalls being whisked away from graduation on the bus down to Hendersonville for the meeting. He had always had an affinity for Indian Lore and looked to start the program up at this new camp. When he finally met Miller, where he found him lounging out by the flag-plaza at Camp Greystone in an Adirondack chair, buried under a pile of papers, trying to put together a camp. Miller, looking up from his work, asked him what he thought he could teach.

Jim spent the next week freezing in the frigid spring waters at camp Blue Star getting his WSI (Water Safety Instructor) certification. Then, went to the area that was in the makings of being a camp. “You just had the first 12 cabins, the infirmary, the dining hall. Lake front was assistant director Paul Neil’s house. The field and the barn: much smaller than it is now… The waterfront was pretty much like it is. But it didn’t have the upper deck. And Blobs hadn’t been invented yet. It just had a diving board and that was it." Among other details, Jim recalls a lack of canoes and a monkey bridge spanning diagonally across what is now the paddling area.

With a staff of over 130 now, I asked him what the early employees of Falling Creek who ran the camp were like. Jim recalls the first staff-members of FCC were from all over, some veterans of wars and from other camps. “Horseback riding had been run by Corbert Alexander… who had been in WWI as a cavalry man.”

Corbert used the fields that are now for soccer and ultimate Frisbee for horse shows. “The first summer they [Corbert and Sally] did a gymkhana, which was like some athletic stuff on horses and things up on the field. The whole camp sat up on the bank. And we were told to be careful not to sit and break the trees, because they had planted all of these white pines that are now like hundreds of feet high. We were told to be careful because they were no less than a foot high."

Jim, being WSI trained, served as a lifeguard, and taught the first caretaker’s son how to swim. He also served as a member of the canoeing staff. He remembers the days he would travel down the steep mountain roads to the Green River with the canoes strapped to a trailer, and the next year when he would ride horses up the same roads as a member of the riding staff. But he does have one area that he’s always had a fondness for.

“Indian Lore has always been my favorite. I did it before. That’s what got me the job at camp. All these years later I still do it.” Having written the curriculum for the original Indian Lore activity, and attending local Pow-Wows by the still-living tribes of America, his role in the area is an ongoing passion. 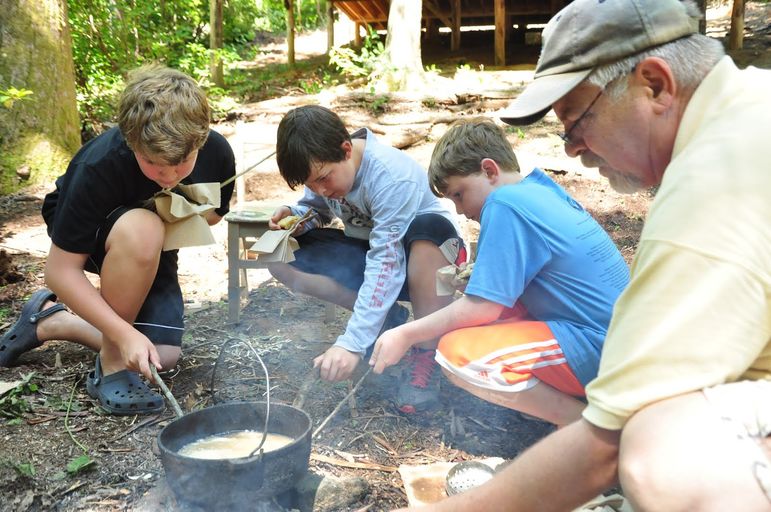 “What I like is the night of ‘Grand Counsel.’ Everything becomes transformed and the kids become Indians… The fire is going. They’re all dressed up. They’re doing their roles. And everything we’ve done— you know, all the little bead stringing, all the leather dying— comes together. They’re there. They’re present in that moment. The drum’s beating. The fire’s burning.
“Everybody always says [to the kids], ‘Don’t you get scared in front of the audience?’ And they always say, “What audience?”

From the beadworking to the singing, he has done his part to maintain the integrity of the the traditions, keeping it as close to the standards of the culture as possible. “You’ll be respected among Native Americans if you tried your best to be traditional and make things correctly, and act correctly, and dance correctly.”

With his ambition unchanged, adding pioneering-esque woodwork to his classes this year and establishing the Indian Lore lodge as well as its surrounding area in its new location on North camp, he still works to leave his impact on camp. I thanked Jim for his time, letting him know that I would be back to learn more about his hand in building the camp.