Fun on Day One

We're having a ball already!

The first thing people notice when they arrive at camp on Opening Day, is often the incredible mountain view from our overlook, gazing out across the Green River Valley and the surrounding hills of green. This morning as the sun peeked over the ridge, those same mountains were shrouded in a sleepy mist, blanketing the valley and making the view even more spectacular. The weather was cool and crisp as we woke up, since it rained during the night but was clear before the morning bell. Energized by the refreshing temperatures, everyone gathered eagerly at breakfast, fueling up with a hearty meal to prepare for the first full day ahead.

Chef David and the rest of our kitchen crew had been busy early, preparing homemade french toast on the griddle for breakfast. We also enjoyed sausage links, grits with butter and cheese, hard boiled eggs, yogurt, cottage cheese, fresh blueberries, strawberries, and oranges, as well as cereal on every table for plenty of options. After the meal, we started the day off right with Morning Assembly on the front porch before activities. Morning Assembly is the time where everyone gathers for songs, skits, and announcements to start the day. It’s funny, high-energy, and sets the mood for a great day. With a full day of activities ahead of us, there was no time to waste, and cabin groups were heading excitedly to their first locations of the day. 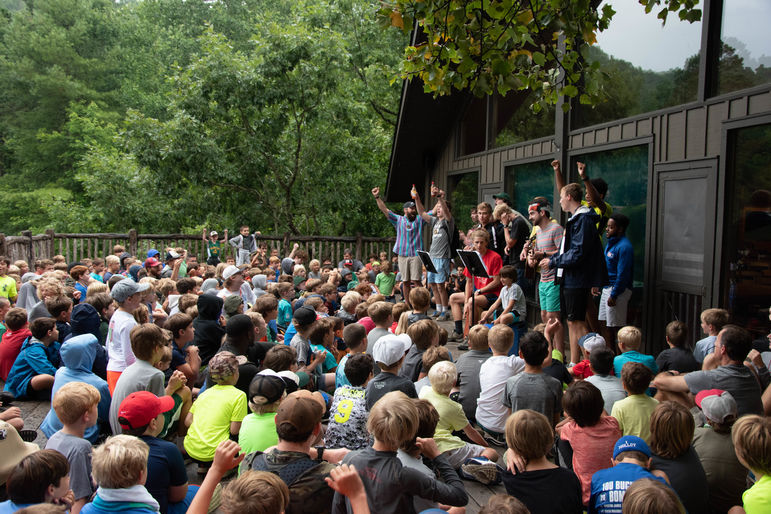 At the F.A.R.M. (Food, Animals, Repurposing, and Manpower), the boys would be building terrariums, taking a tour of the garden, and playing with the chickens. Before building their personal terrariums in jars, the FARM Manager, Zeb, explained how terrariums are home to a tiny ecosystem. He detailed the water cycle that happens in a terrarium through condensation and evaporation, comparing it to earth’s water cycle on a larger scale, and how rain is necessary for the plants in our garden. Each boy added pebbles, soil, and moss to their terrariums. They could also decorate them with small plastic dinosaurs.

After making terrariums, the cabins were able to see what was growing in the raised beds in the garden. “Who can tell me what kinds of bugs are good in a garden, and what kinds are bad?” Zeb asked the group. They were observing some tiny aphids that had found their way onto our okra plants, and the campers all pointed out that these bugs were pests. However, several boys also spotted little ladybugs, slowly making their way along the leaves and eating the aphids as they went. They also spotted spiders and a praying mantis, both good for eating other pests on the garden plants. As they moved through the tomato plants, carrots, snap peas, and squash, the boys were able to see a whole ecosystem of bugs that they didn’t usually notice in their day to day lives. They also got to see the tiny watermelon which were slowly growing, guess which plant was rhubarb, and pick one of the radishes to taste it. “This tastes so spicy!”, Miller exclaimed, surprised. 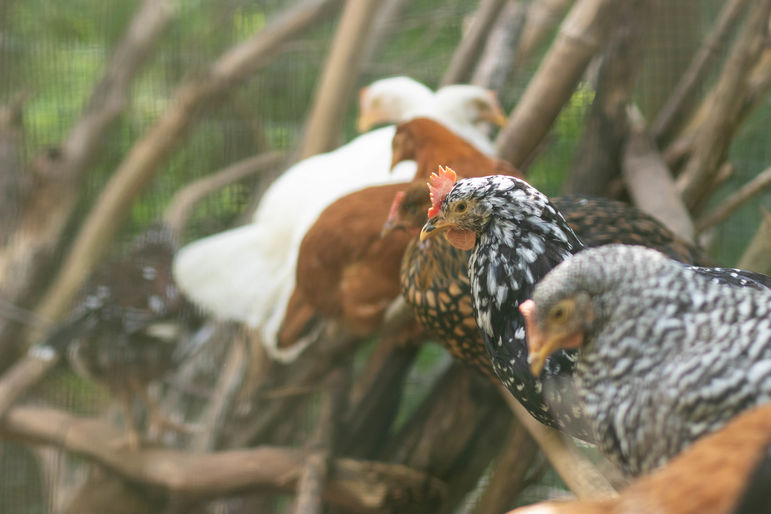 Some of camp's fine feathered friends

Gray M. was eager to meet camp’s 23 chickens. “My grandparents have a farm too,” he told me. “Except I don’t think their chickens like me much.” He held out a worm for one of the chickens to eat from our compost area, and was excited when the hen pecked it right out of his hand. “Did you see? That chicken just ate my worm!” Ty was the first boy to hold a chicken, picking up Queenie, a Rhode Island Red who is one of our most social and curious hens. She walked right up to him, acting like the queen of the coop, just like her name.

Though hanging out with the chickens was an exciting moment, the boys had plenty more excitement ahead. I asked Hugh what he was most looking forward to, and he said it was horseback. “I’ve only ever ridden small ponies around in a circle at the zoo,” he explained. When I told him that the barn staff would be taking them on a ride around camp on our horses, his eyes lit up. “Oh! This is gonna be so fun!” he exclaimed. 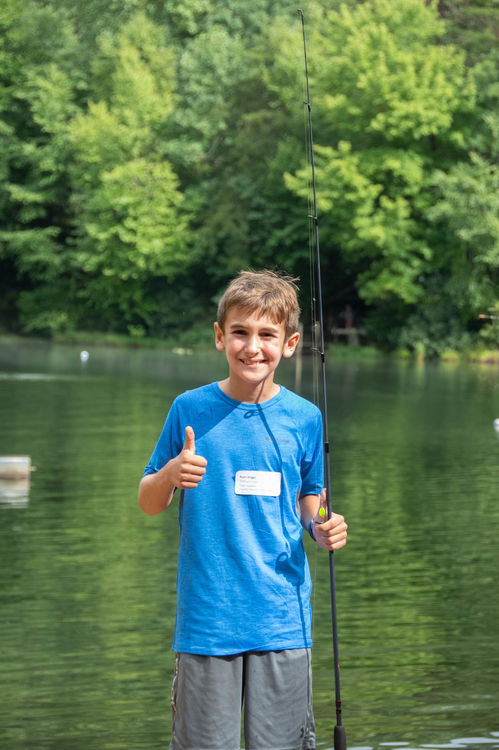 Thumbs up for a great first day!

The fun part about Junior Camp is that the boys get to try every activity, enjoying a sampler plate of what camp has to offer. After a delicious lunch of grilled cheese, tomato soup, pasta and kale salad, and caramel sugar cookies, we celebrated the birthday of Max in Cabin Gall! We then recharged during Rest Period, and headed right back into the activities for the afternoon. There were boys paddling around in canoes on the Lower Lake, coloring crazy patterns with oil pastels in Arts and Crafts, climbing to the top of the Climbing Wall, making arrowheads in Blacksmithing, practicing their aim in riflery and archery, and more. Over these next few days, each boy will get their chance to visit every activity. The eagerness and excitement throughout the camp community is palpable, as the boys run from one fun activity to another with their cabins. 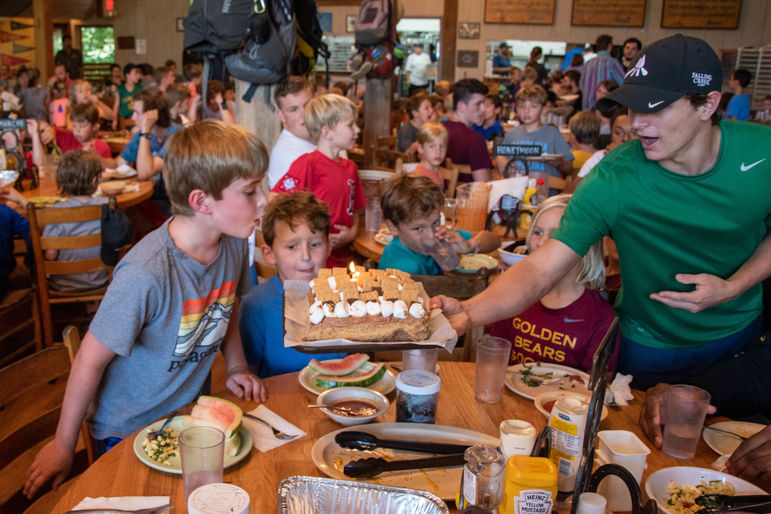 BIrthdays at camp are so much fun! 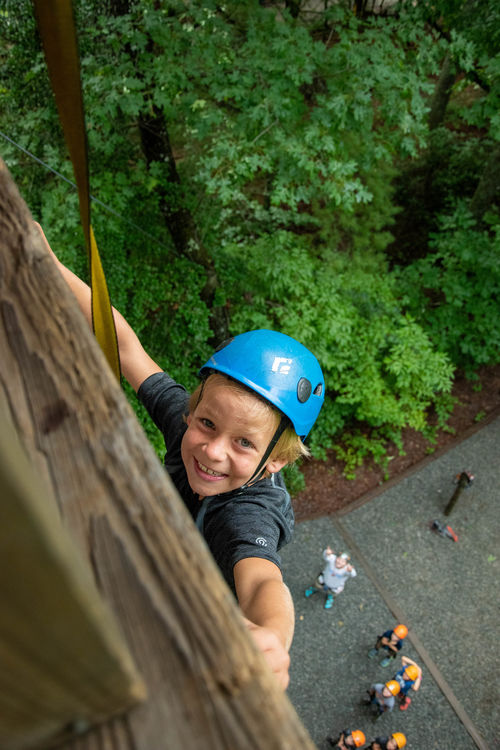 Reaching the top of the climbing wall!

Tonight’s dinner was baked chicken with potato wedges, honey glazed carrots, a full salad bar, and vanilla pudding with Oreo sprinkles on top. For Evening Program, the entire camp split into Green and Gold sides and then played a campwide game of Capture The Flag. Each team has its own half of camp that is theirs to defend. In this version of the game, each cabin group must stay together. You can move anywhere in camp within the boundary that Smat described to everyone. If you encounter another cabin on your side, you can challenge them to a rock, paper, scissors duel to gain valuable items the other team may have in their possession. There are also hidden balls on the opposite side of your team that you can quietly sneak into enemy territory with your cabin group to see if you can find. These balls will gain your team points. If you find the main opponents color flag, and can pick it up and successfully run it back to your side, then that becomes huge points for your team. Without question, both the boys and the counselors were loving playing this game tonight. Even the camp physician and his family were playing hard tonight.

After the big EP tonight, the boys ran to the Dining Hall to enjoy milk and cookies. Everyone headed to bed happily exhausted, ready to do it all again tomorrow morning. 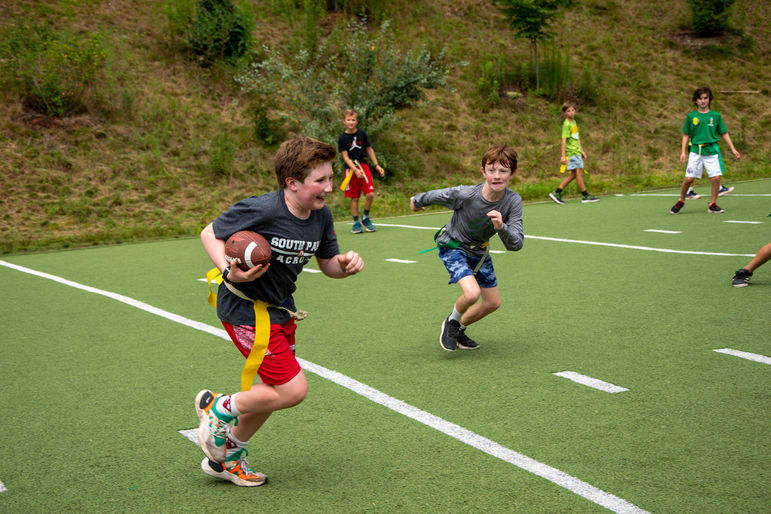 Flag football is as popular as ever this session!
Comments (3)