Checking Off The Camp Bucket-List

When boys arrive at camp on Opening Day, many of them already have a goal or two in mind, ready to check off of their mental “camp bucket list” as the session progresses. These goals can be activity based, like riding a horse for the first time or making it to the top of the climbing wall. They can be more general, like making it through four weeks away from home for the first time, or making at least 5 new friends. Some boys have progression-based goals, like making it to Warrior in an activity or becoming a Journeyman. For Paul M. in Cabin 5, his camp goal had to do with progressing through the paddling program.

“My goal this summer was to get a yaklet,” Paul told me, proudly showing off the green bandana bracelet on his wrist, known around camp as a “yaklet.” He had just earned it last week after his trip down the Nantahala River, and was preparing for his first day in a kayak today. If you read the July 9th blog, you might already know that “yaklets” are given to boys who have progressed through the paddling ranks in a canoe, proving that they have the skills and confidence to start learning in a kayak, if they choose to move on from a canoe.

In that July 9th blog, we heard about Patton V. in Cabin 5, who was going on the Nantahala trip and was most excited about making it down the Falls. Patton was proudly sporting his Yaklet at the docks this morning as well, just as eager as Paul to get in a kayak. “The first time I went down the falls I didn’t make it down right-side-up,” Patton explained, “so we had to carry our canoe and gear back up to the top of that long rapid and do it again.” The second time, he and his paddling partner made it, achieving his goal and earning himself a spot in a kayak. He was back at the docks, ready to keep building his skills with a Lower Green trip this morning. 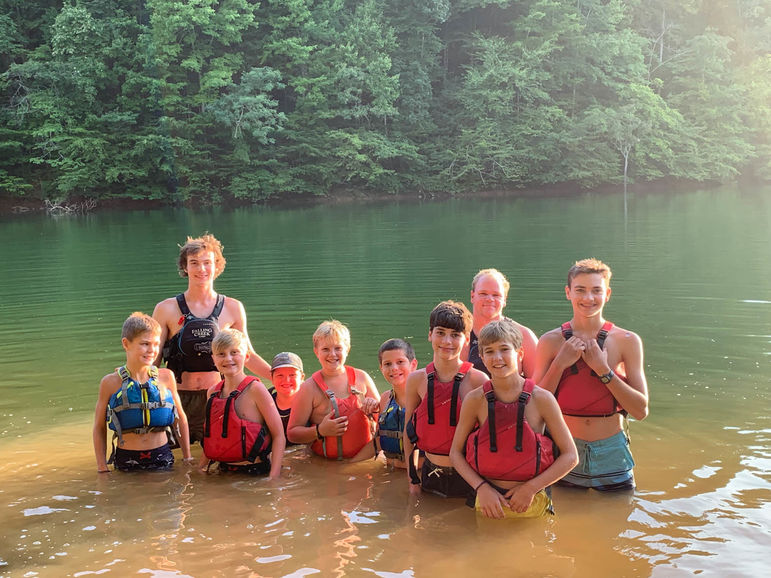 Last week's Tuckasegee/Nantahala paddling trip - both Patton and Paul were on the trip and earned their Yaklets!

Paul was planning to head on the same Lower Green trip, but with all the busyness of the weekend, he hadn’t made it to the docks in time to get his paddling prep done. Luckily, counselor Daniel McCarthy, known by his FCC friends as “Cuatro,” offered to give Paul a lesson before the trip headed out so that he would be able to join them on the river. With only 4 days of activities left in camp, this would be one of Paul’s only chances to get on the Lower Green in a kayak, so his paddling counselors wanted to make sure that would be able to happen.

Right after breakfast, paddling counselor Charlie Pike began loading the trailer and preparing the van, while Cuatro met with Paul to teach him the basics and make sure he was confident and comfortable in the kayak. He picked out a boat and paddle in Paul’s size, and showed Paul how to put on the kayak spray “skirt,” made of stretchy neoprene to keep water out of the boat as you paddle through rapids. After making sure everything fit, Paul pushed out into the water to practice his “wet exit.” Though boys have to master their roll before making it on more advanced whitewater, you just have to know how to wet exit before paddling down the tamer Lower Green. If you happen to flip over while paddling, you can either roll the boat back up with your hips and the paddle, or you can pull the handle of the spray skirt off and swim out, known as a “wet exit.” 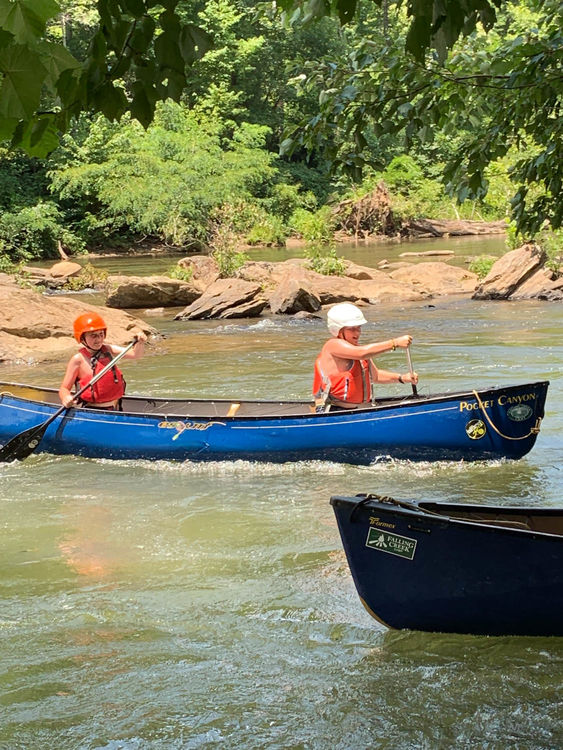 Cuatro walked Paul through the steps before he flipped himself into the water. “Once you’re flipped under the water, I want you to tap the right side of the boat three times, then rub the left side three times. Then pull your skirt and swim out.” Cuatro wanted Paul to take his time underwater, rather than just flipping and pulling the skirt immediately. This way he would be able to see if Paul was calm under the water or if he would panic. Paul took a deep breath and flipped over, and several seconds later he surfaced back up effortlessly. After showing calm under water, learning basic strokes with a kayak paddle, and demonstrating he could make some basic maneuvers in the kayak, he proved himself ready to join the trip to the Lower Green! He and Cuatro finished their lesson just as the rest of the crew was finishing loading boats on the trailer.

While the boys on the Lower Green were getting ready for their first time in kayaks, some of our more advanced paddlers were packing up their own trailer for some bigger whitewater. The advanced trip was heading out to another challenging river. James L. from Rising Warrior was among them, and had been chatting with Paul as the two of them got ready for their different river trips this morning. “Hey, aren’t you my neighbor?” Paul asked James, noticing that the two of them were both locals from Hendersonville. “Yeah!” James responded, shaking his hand. “If you want to meet up in the off-season, I can help teach you how to roll,” James offered, knowing that today was Paul’s first day in a kayak. Paul seemed excited by that idea, and the two wished each other luck as they packed up for their respective rivers. 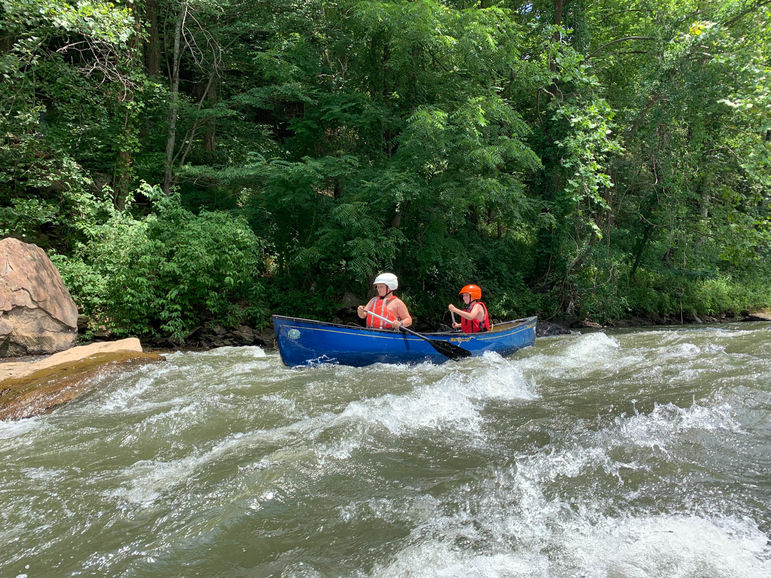 Part of the Yaklet earning process on the Tuckasegee

No matter what a camper’s goals are during the summer, our goal as counselors is to help them reach that goal. Boys work on their progress year after year, returning each summer, but the progress doesn’t have to stop when the session ends. Many boys meet up during the off-season with friends they met at camp, working on their favorite activities together. We also encourage boys to reach out to their counselors and write them letters, staying in touch with those mentors throughout the year. Though we only have less than a week left in this session, we are excited to continue laying the foundation, introducing boys to skills that they can progress in long after camp has ended. Here’s to another day of growth and fun tomorrow!

Camp friends are the best friends! 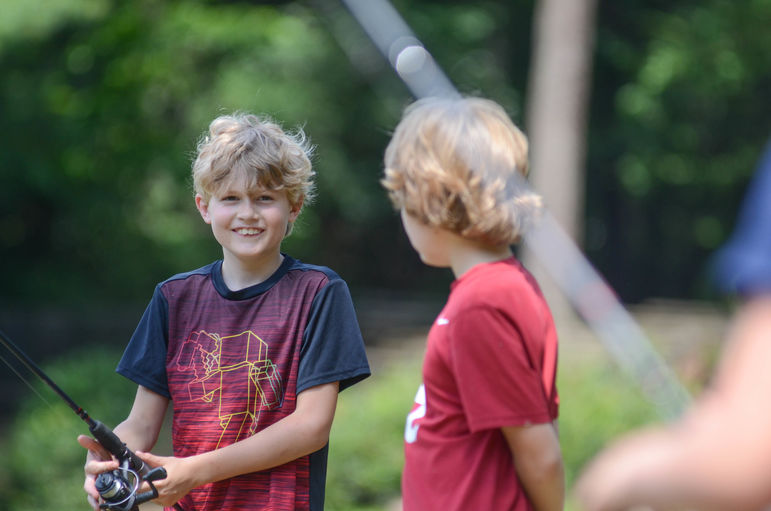 Fishing with friends during Free-Time

More Highlights From This Monday: 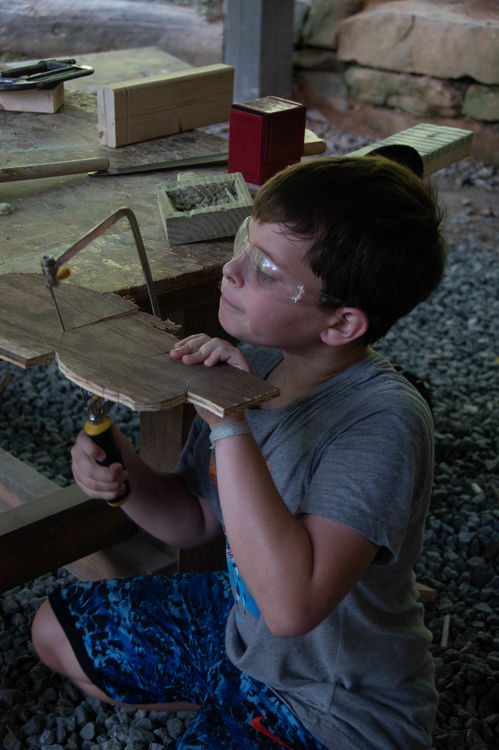 Fully focused on our woodworking projects 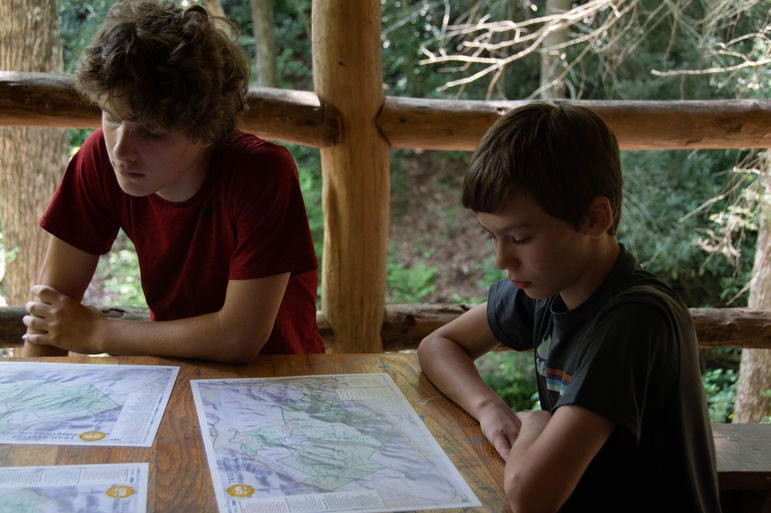