Our Assistant Program Director, Sam Clayton, has been a friendly and familiar face in and out of camp for the past three years. You may have met him at your college job fair, played one of his invented “all-camp-games” during the summer, been belayed up Gilbert’s Rock by him, paddled with him down local whitewater, or received one of his “fist bumps” between activity periods. Sam has been crucial to both the recruiting process and alumni communications during the offseason, as well working with Program Director Kyle to ensure smooth programming throughout the summer. After three great years at Falling Creek, we want to wish Sam Clayton the best as he moves on to his next chapter in life.

As many of you know, Sam and his new wife Maddie were recently married after this past summer. We have been fortunate to have Sam at Falling Creek since 2017, and we are overjoyed for he and Maddie as they begin their next stage together. Sam graduated from Young Harris with a degree in outdoor education, and was a District Executive with the Boy Scouts of America before joining the Falling Creek team as our Assistant Program Director. Sam consistently embodies the Falling Creek Code, and his enthusiasm for camp was visible every day. 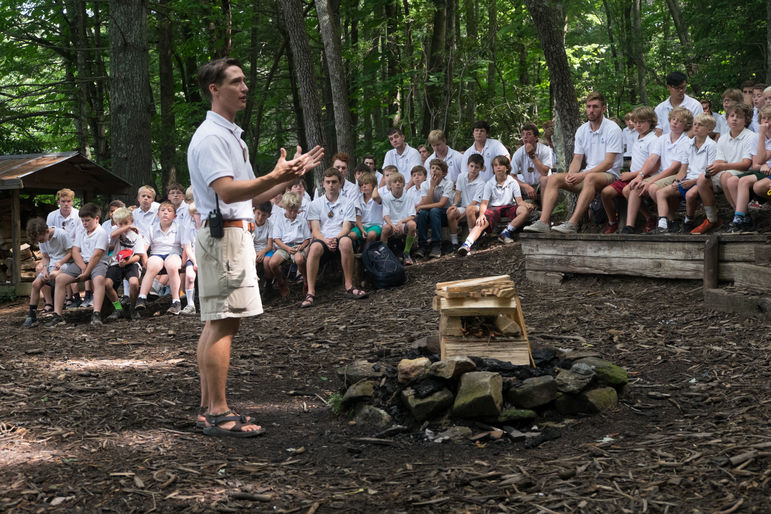 Sam often led parts of Church or Campfire, and his genuine care for the counselors and campers in our Falling Creek community was readily apparent.

Though he was never a camper, Sam fit into his role at Falling Creek so seamlessly that you would have thought he was a lifetime “Falling Creeker”. Out of everything at camp, Sam shared that, “the thing I enjoyed the most was making a profound impact on the lives of our boys through great experiences, a solid community, and a connection with nature.” Though Sam made it seem like it was all fun and games, being in a leadership role at camp can be hard work. “Running a cookout for 450+ people is no small task!” he jokes. 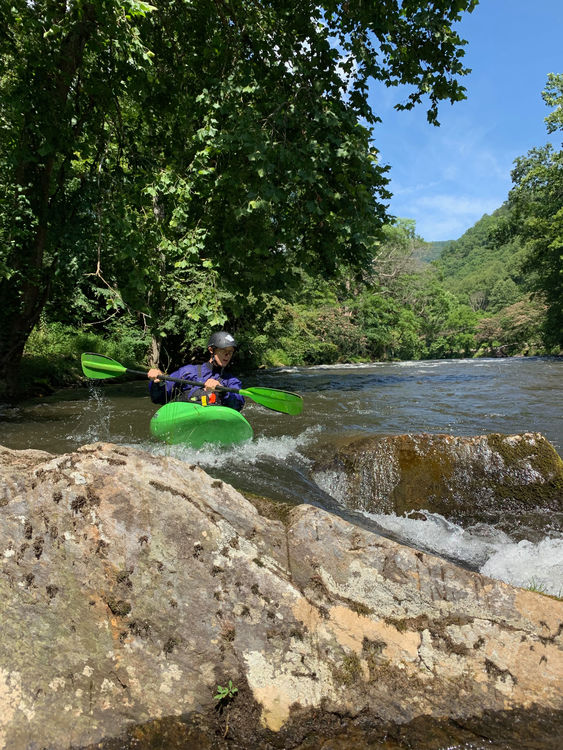 A multi-talented outdoorsman, Sam can instruct on an outdoor adventure trip just as easily as he can invent and lead an Evening Program!

Anyone who has worked at camp can attest to the fact that though the work can be demanding, the rewards are worth it. Sam explained, “the biggest lesson I learned is that the true hero of any boy’s summer is a good counselor who can bring to life the camp experience.” He plans on using that lesson in his future endeavors by always striving to be the best version of himself, leaving a positive impact on those around him. “The biggest takeaway for me in my next professional career, will be how I choose to lead and learn from the people I have the pleasure working with,” Sam shared. 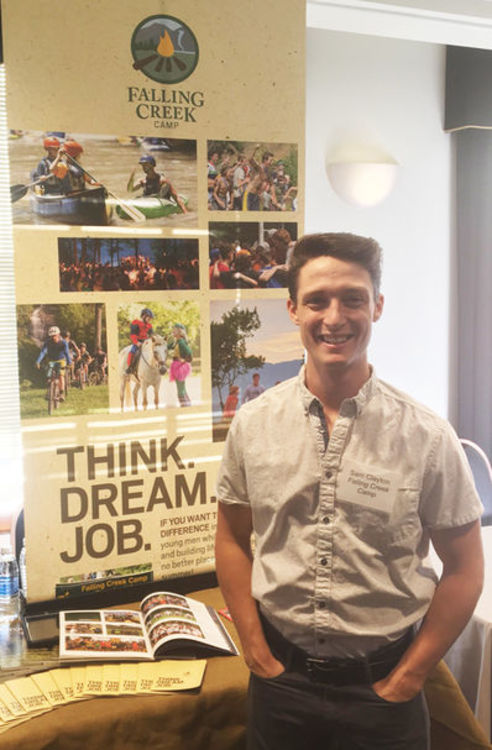 Sam was a familiar face at the college job fairs during the Winter and Spring, focused on recruiting the best for camp!

A true member of the Falling Creek Community, Sam will be missed in the summers to come. Likewise, Sam will always hold dear the friends he made at camp, saying, “I am most proud of the relationships I built over the course of my time at FCC. I was blessed with so many opportunities to positively affect lives and have my own life affected in the same way. Some truly great friends and mentors were gained in my time at Falling Creek.”

When asked about the future, Sam says, “The next chapter of my life began with marrying the love of my life (Maddie)!” As Sam and Maddie begin their lives together, we wanted to highlight the many positive values that Sam brought to our camp community, and share how happy we are for them both. We wish him the best as he chases his dreams of becoming a sommelier, and wherever their journey takes them next! 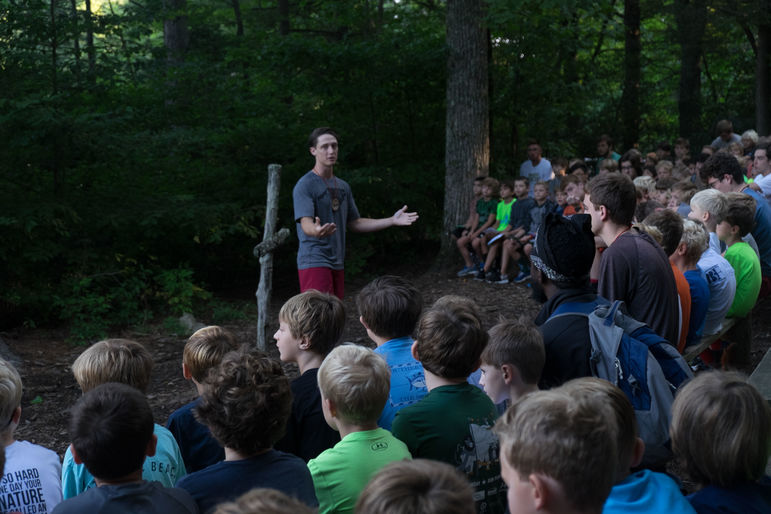 The History and Recipe Behind the Camp Classic: “Longenecker Lumps” 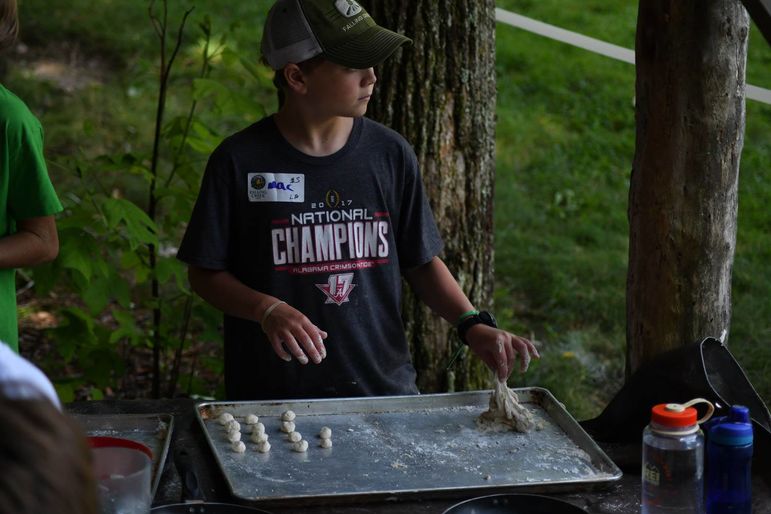 Make some for yourself and taste the tradition!

Campers young and old can recall the smell of frying dough, the taste of cinnamon sugar, and the excitement upon seeing Steve Longenecker with his “lump cooking supplies” at camp. Though campers today will often cook these simple doughnut-like treats during free-time at camp with Steve, they are a favorite among those who have ever had the pleasure of being on one of Steve’s climbing trips, and are remembered as a “backcountry cooking” classic at Falling Creek. I’m sure the alumni reading this now can remember the wonderful smell and taste of these treats – but you might have wondered, how did Longenecker Lumps come to be? 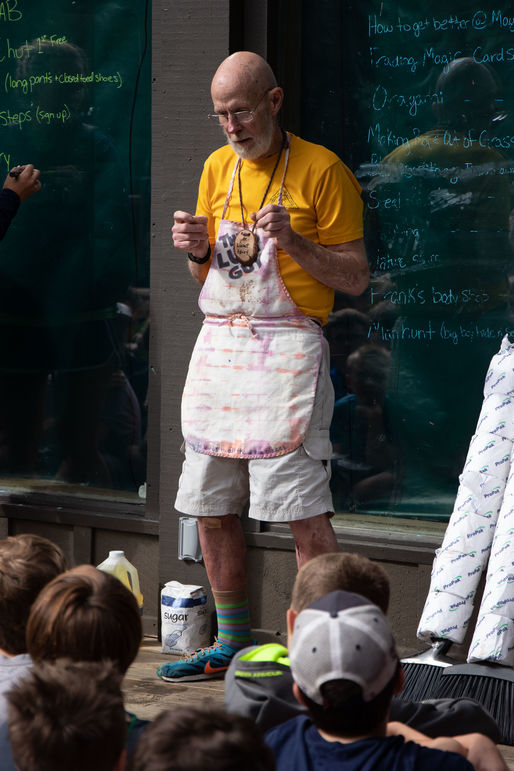 Steve announcing that it's "Lump Day" at Morning Assembly!

The legendary Steve Longenecker has been a long time outdoor educator, nature enthusiast, falconer, rock climber, and “lump chef” at Falling Creek since 1975. Steve shared that his “lump recipe” was born during a backpacking trip in the 60s. “A long, long time ago, back when there were real hippies running around (ask your parents about them) and before Falling Creek Camp existed, I worked at Camp Mondamin, one of our neighbors down on Lake Summit,” Steve recalls. “I was on a hiking trip with some boys and we were camping in the Shining Rock area. We had some leftover bacon grease in a small metal can and some left-over biscuit mix. I heated up the grease, dropped in a glob of dough and ‘Longenecker Lumps’ were born!” Steve brought the recipe from his time at Camp Mondamin, to Camp Sequoyah, and finally to us at Falling Creek. 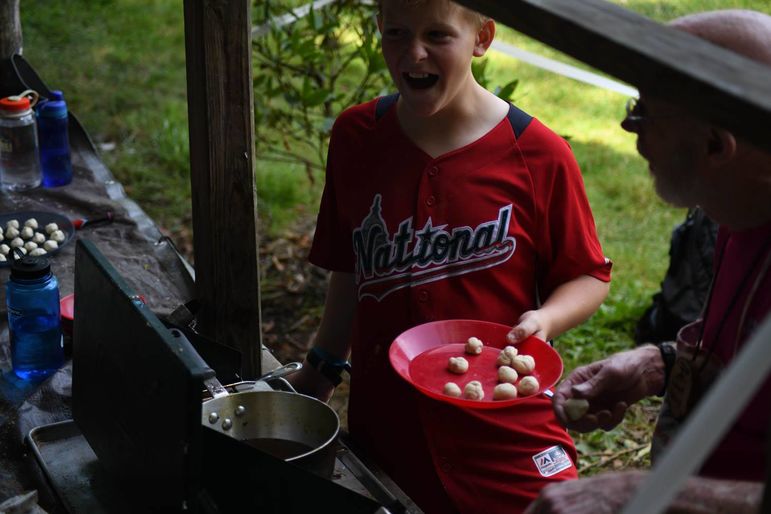 Even decades later, Longenecker Lumps are still a favorite treat among campers

These days, in a single afternoon, you’ll see Steve and several enthusiastic campers making hundreds of these sugar coated lumps to share. The boys learn how to mix the biscuit-like dough, form it into “lumps,” fry it like a doughnut hole, and cover it in brown sugar and cinnamon. They are warm, soft, sugary, and as you can imagine they don’t last long. Boys around camp will line up to try one (or three), tasting the tradition. Even Yates Pharr remembers his first Longenecker Lump. “It was in 1979 and I had just finished a 5-day backpacking trip in Linville Gorge with Chuck McGrady (our previous Falling Creek Camp Owner/Director for 17 years). Our team had just met up with Steve and his group of climbers coming off of Table Rock, North Carolina. Steve cooked up a batch of his famous Longenecker Lumps, and man, they were good!”

Longenecker Lumps are still a familiar tradition of camp’s that Steve hopes to leave as his “lump legacy.” Though the concept is as simple as mixing and frying a few ingredients, Steve’s favorite part about the entire process is seeing the boys teach each other things that he has taught them. This sharing of knowledge is what the traditions at camp are all about, and once taught, the boys can continue to pass on that flame for years to come. With Steve’s own recipe below, now you can enjoy cooking and sharing Longenecker Lumps at home, or on your own backpacking trips! 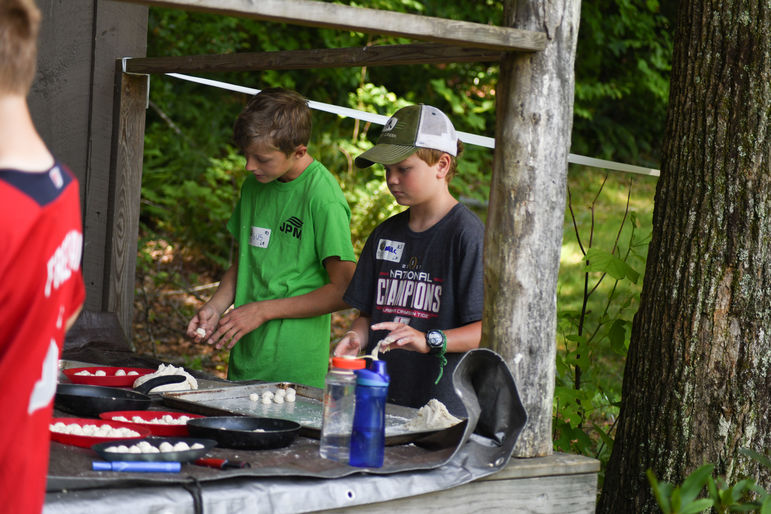 What do you need?

How do you cook them?

Put Bisquick mix in a mixing bowl, being sure to leave some in the box. Sometimes, you need to add more mix to keep the dough from becoming sticky.
Add water to the dry mix and mix it around until you have a big lump of dough in your bowl that is not too dry or too wet. Play with this until you have a glob of mix that is about softball size and is the right consistency (too dry, it won’t hold together; too wet, it’s all yucky!) You’ll also notice how clean your hands are, now that you have been playing with the dough a while.

Now it is time to pinch the dough into the perfect-sized “Lump”. Roll each one around between your palms until it is formed just right. What size is “just right”? About the size of a large grape, marble or a very small soccer ball is fine. Too large and they’ll be raw on the inside; too little and they’ll burn up in the oil.
Now it’s time to heat the oil. Have your pot clamp or pad ready, just in case you need to move the hot oil. When you think the oil is hot enough, take your slotted spoon and gently roll a “test lump” into the hot oil. Never drop one into the oil so that it splashes on you. Hot oil burns!

If the oil is hot enough, the “lump” will float to the top and cook there until the right color; if the oil is not hot enough, it will sink to the bottom of the pan.
When the oil is just right, gently add more raw “lumps” to the cooking oil and let them cook until it’s time to roll them in the sugar/cinnamon mixture.
As you take them out of the hot oil, drain them so that the oil goes back into the cooking pot. Now, put them into the cinnamon/sugar mixture, roll them around, then eat! 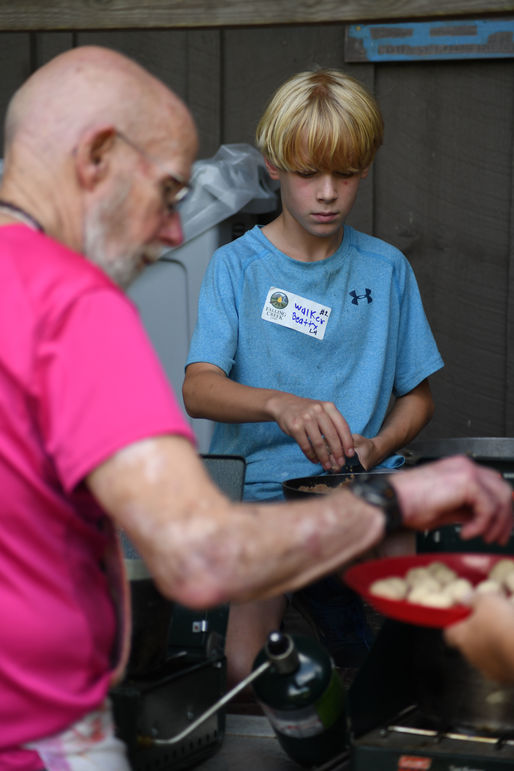