Last summer (2012) we had many boys who became members of an special group of campers,“Falconers of Falling Creek Camp (FFCC)”. Nine boys during June Camp, three of which were members of the original group from 2011. 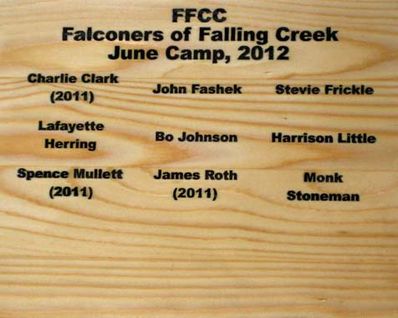 During our Main Camp session, we had fifteen campers who were FFCC members. Five had been part of the original (2011) group, along with ten new boys. 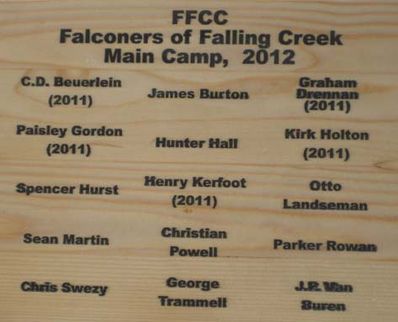 Cal Oakley was the first and founding camper from 2006. His name is engraved on the original FFCC plaque at the Nature Hut, along with the names of Boy Scouts and adults who constructed two sets of enclosures, several at Falling Creek and another set at Steve Longenecker’s home in Asheville NC.

Each summer, Falling Creek campers see the attractive wooden signs on the side porch wall of the dining hall, then often ask, "How can I become a “Falconer”? Easy!…

During the second week (“Raptor Week”) of both sessions, Steve brings the falcons/hawks/owls to Camp for six days. The birds have comfortable enclosures outside of our Nature Hut, where they stay, each in their special cage, for the week.

Under the tutelage of Steve and Nature Staff counselors, interested boys of any age learn how to feed, maintain the “mews” (Falconer’s name for the cages) and check the raptors before bedtime each night. Towards the end of “Raptor Week”, these boys present an elaborate “Raptor Show” to the Falling Creek community, where they plan, organize and narrate the entire program.

The “Falconers of Falling Creek Camp” are unique in the summer camping world. This is the only camp in the U.S. who has the Federal and State permits to have raptors in-residence on the camp property.

For 2013, our hope is to include new campers into the June Camp and Main Camp FFCC groups. Interested boys should be alert for information. “Raptor Week” will be the second week of each session.

The Hull's send FCC a Hello From Wildcat Country 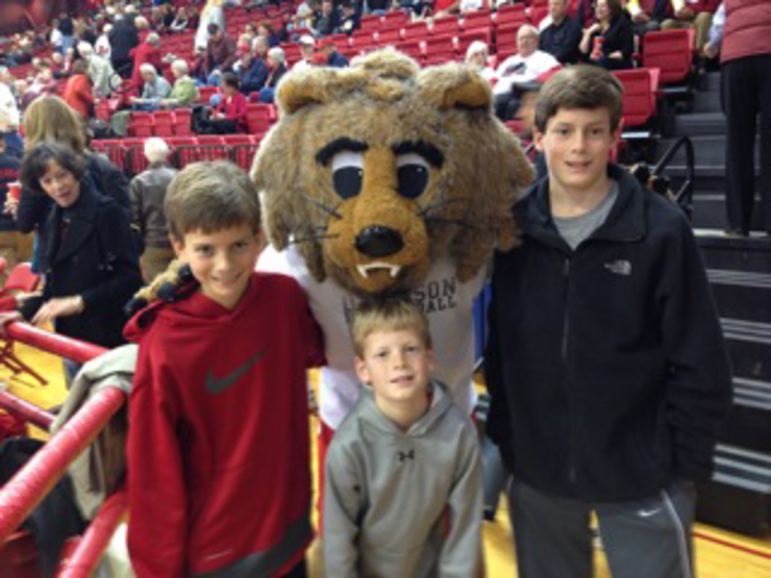 The Hull boys were thrilled to see one of their favorite counselors at the Davidson College basketball game. They are all excited to be returning to FCC for the 2013 summer. 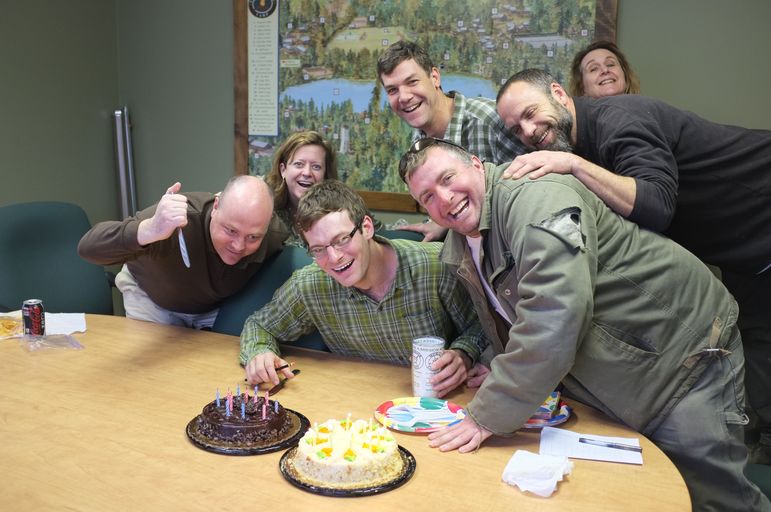 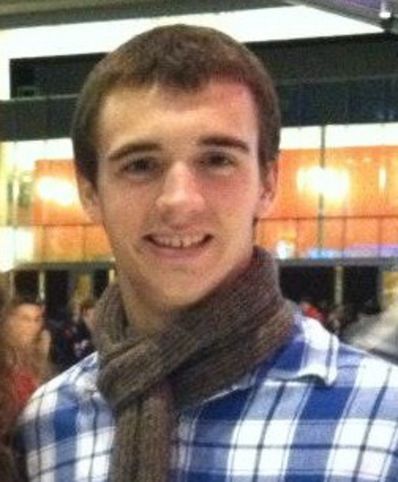 Evan Wescott is from Jenkintown, PA and is the oldest of eight brothers and sisters. Evan attends Catholic University in Washington, DC and is majoring in mathematics and secondary education. When Evan is not busy with class, he plays on the schools ultimate frisbee team and enjoys exploring our nation’s capital. During high school, Evan was very active with the YMCA as a lifeguard and swimming instructor. This will be Evan’s first summer at camp as a member of our cabin staff and will teach swimming and ultimate frisbee.

David Kinne is a student at Bowling Green University in Ohio majoring in Communications. David learned of Falling Creek through his roommate and FCC rock climbing instructor, Dylan Hall. At school, David is highly involved with the Outdoor Adventure Club as a trip leader and assistant manager of the school’s rock climbing facility. Over the past year, David coordinated the Bowling Green University Youth Climbing Club teaching local children the skill and knowledge of climbing. This will be David’s first summer at camp as a cabin counselor and climbing instructor. 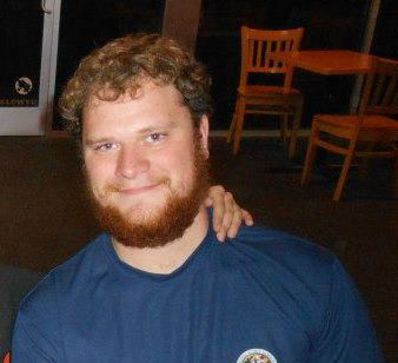 Sam Lyons is a former camper and CIT from Keene, KY just outside of Lexington. Sam is a first year student at Asbury University studying Media Communications. Sam is an Eagle Scout and spent last summer guiding BSA canoeing trips along the Boundary Waters near Minnesota. As a camper, Sam was highly involved in our Indian Lore program and progressed through the ranks. He will put this knowledge and these skills to good use teaching Indian Lore this summer, as well as, join our cabin staff. 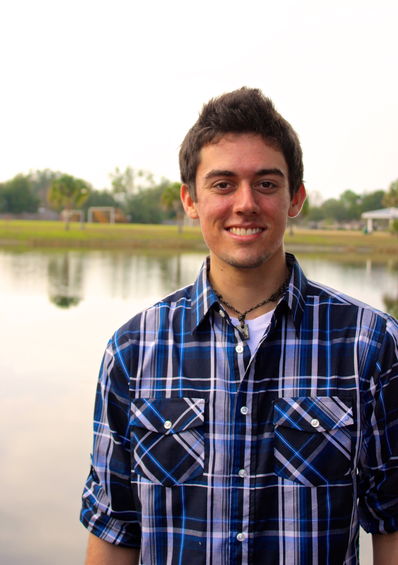 Thomas Saunders is a former camper and CIT from Winter Springs, FL and is completing his first year studying accounting at the University of Central Florida in Orlando. Thomas is very involved at school with Baptist Collegiate Ministries, Young Life and Intramurals. Thomas is a National Collegiate Scholar and still finds time to participate in local fishing tournaments. During Thomas’ CIT year, he was mentored by Scotty at the riflery range as an instructor and will continue in this capacity his first year on staff, as well as, a member of the cabin staff. 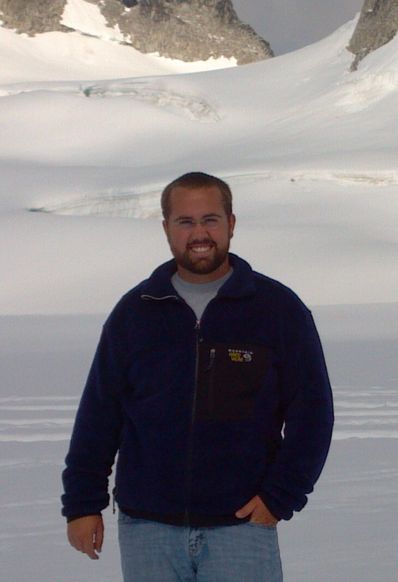 Mattison Wilkins is an Eagle Scout and former camper from Shelby, NC. Mattison currently attends Appalachian State University in Boone and is completing his second year studying business management. Mattison is very involved with Young Life at school. When he is not so involved on campus, Mattison can be found fly fishing on the local streams. This will be his first year on staff as a cabin counselor and fly fishing instructor.

Julie Stewart is a senior at Huboldt State University majoring in Environmental Management and Protection. Last summer, Julie worked as an intern at the Lindsay Wilson Museum as an Interpretive Program Keeper in Walnut Creek, CA. At the museum, she engaged visitors with the exhibits of live animals and performed presentations about the animals. 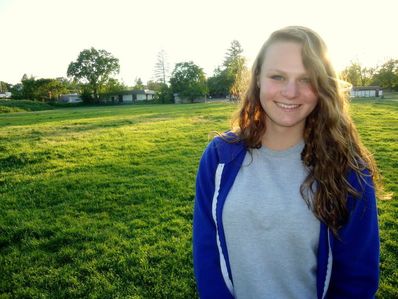 The Lindsay Wildlife Museum is a children’s museum and spent a lot of time answering questions and sharing her interests in the exhibits. As Vice President of the Redwood Chapter of Environmental Educators and Interpreters, Julie enjoys working with children in the outdoors, teaching them about nature in creative and fun ways. This will be Julie’s first summer at camp teaching nature and swimming lessons. 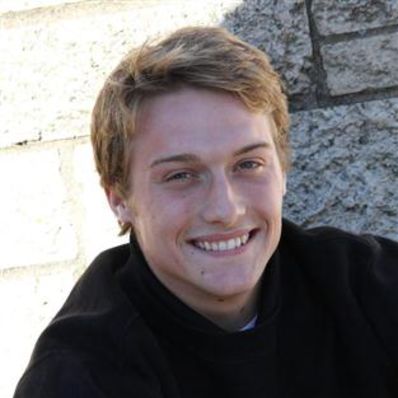 Paul Floersch is a student-athlete at Benedictine College, where he plays on the varsity men’s soccer team. Paul leads the weekly team Bible Study and is spearheading a mission trip to Benque Viejo, Belize over spring break. This year the team will host a soccer camp for local children. At Benedictine College, Paul is the President of his dormitory, and a member of Student Government. In 2012, Paul was the Champions of Character Scholarship Recipient for his sport in the NAIA. This will be Paul’s first summer at camp as a member of the cabin staff and he will teach soccer and cross country. 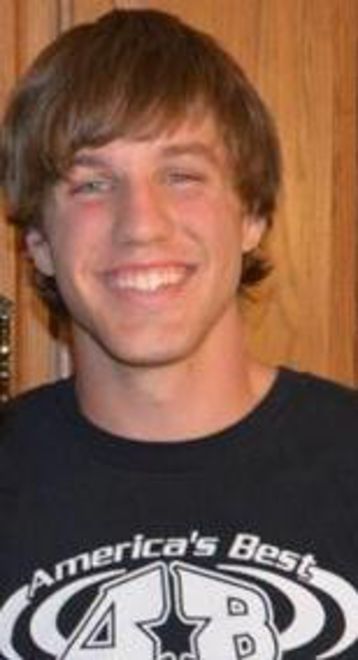 Joe Dininger is a junior at Bellarmine University majoring in biology. Originally from Ostrander, OH, Joe was very active with Young life in High School and attended several Young Life camps. At Bellarmine, Joe is a member of the university ultimate frisbee team and climbs regularly at the local climbing gym. Joe contributes much of his time at school to the Catholic Students Association and Timmy Global Health. Timmy is a program that sends medical supplies overseas to people in need. This will be Joe’s first summer at Falling Creek as a member of our cabin staff and he will be teaching ultimate frisbee and climbing at the wall. 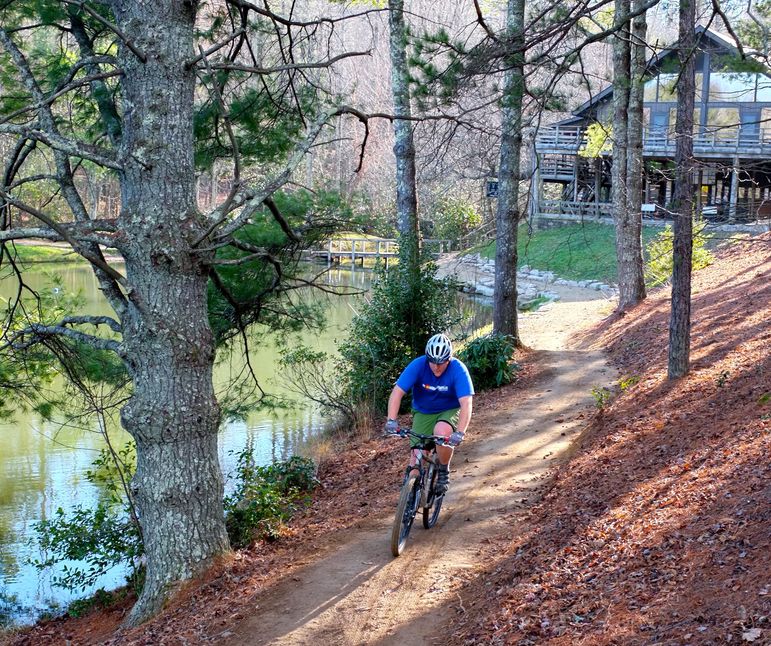 We are very excited that the two new trail sections on the upper and lower lakes are now complete and ready for use this summer by Mountain Bikers, Cross Country runners, Warrior Workouts, and campers and staff who just want to enjoy the lake.